The RLS Energy Network is supported by the framework of the Regional Leaders Summit (RLS). The Regional Leaders Summit (RLS) is a forum comprising seven regional governments (state, federal state, or provincial), which together represent approximately 177 million people across five continents, and a collective GDP of 3 trillion USD. The regions are: Bavaria (Germany), Georgia (USA), Québec (Canada), São Paulo (Brazil), Shandong (China), Upper Austria (Austria), and Western Cape (South Africa). Since 2002, the heads of government for these regions have met every two years for a political summit. These summits offer the RLS regions an opportunity for political dialogue.

RLS-Sciences has a governance structure, which supports the four projects and the RLS-Sciences network. 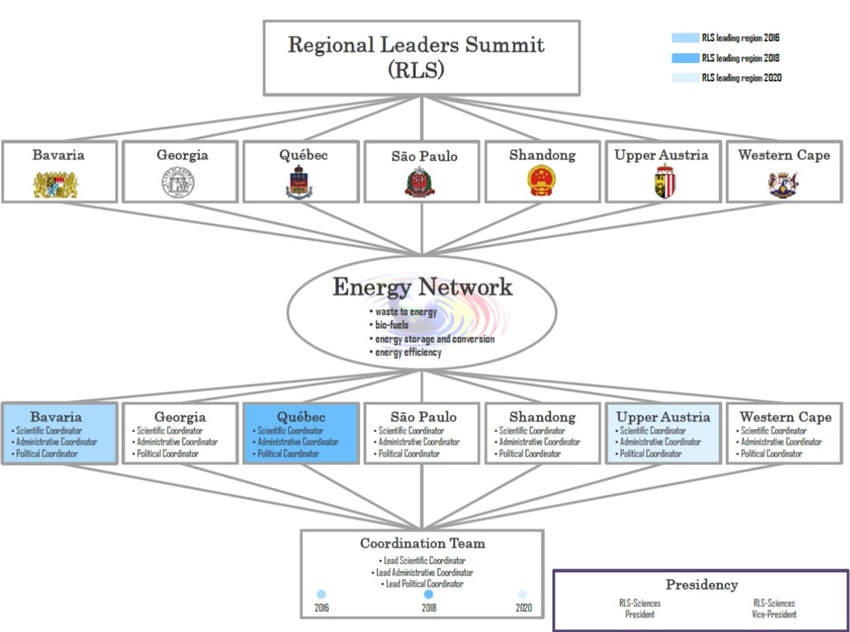 The Energy Network was initiated as a follow-up to the Regional Leaders Summit (RLS) meeting in São Paulo in 2012. It was agreed amongst the participants that renewable sources of energy are a crucial issue that requires extensive research. Due to their unique geographical composition spanning five continents, and in accordance with their research profiles, the RLS regions represent strong potential in this field. Together, the RLS regions can cover all aspects of energy, from production to usage, monitoring to efficiency. The RLS network is used as a means to bring together complementary strengths in energy research to be shared and further developed in a joint effort.

On April 12th, 2012, on the occasion of the Sixth Regional Leaders Summit in São Paulo, the RLS Member States adopted a Final Declaration which included the following commitment (Item 12):
Since 2012, the RLS-Energy Network has held joint workshops in various RLS regions, served as regional experts at conferences, presented joint conference papers, and produced a roadmap towards joint research projects. The first results of this roadmap were presented in 2018 to the 9th Regional Leaders Summit in Québec. An inaugural summer school was also held in 2018, hosted by Québec.

Following the 9th RLS in Québec, the representatives of the seven regional governments released a declaration on the energy transition. Review it here, and read more about the Energy Network's activities here.